Most powerbanks that have a power on/off switch incorporate automatic shutdown when the load current applied is less than some set value.

This means that trying to operate low current devices attached to the powerbanks becomes frustrating as they keep shutting down.

To overcome this I devised the "keep alive circuit" which pulses the output of the powerbank with a load current of between 100 and 150mA.

The time taken to shutdown varies considerably from device to device and also the current limit is also different between devices.

It is best if you can determine the minimum load current that will be tolerated and use this value for the minimum current being pulled by the keep alive circuit.

This is the schematic for the keep alive circuit.

Built around the NE555 Timer IC chip. The unit is in the astable oscillator configurations

R1 sets the pulse ON time and R2 sets the off interval time.

The capacitor C1 can be increased or decreased for longer or shorter time frames.

The blue LED indicates when the timer fires and the red LED shows the status of the USB supply.

The input is usually connected by a USB male plug and the output a USB female socket.

The values shown give around 3 seconds on time and 5 seconds off time although changing these values may be needed to satisfy your particular powerbank needs.

If the powerbank has a long shutdown time (say 25-30 seconds) and your load current is under 50mA then the switching to the lower power CMOS version of the 555 timer chip and removing the power on led will help to reduce the standby current of the circuit to a few micro amps giving a longer run time before the powerbank is depleted.

Cameras like the Panasonic Lumix FZ200 does not have Wi-fi or bluetooth that can be used to provide a wireless remote shutter release.

It can also be used on other Panasonic cameras as a wireless remote without using a smartphone and the Panasonic Imaging app.

The 2.5mm socket on Panasonic cameras provides a 2 wire interface to enable the wired remote controller to either sense the focus button or the shutter button depressions.

By "shorting an element of the potential divider to ground the camera can determine which button was depressed and perform the appropriate action.

The microbit project uses P0 and P1 to turn on transistors which effectively replace the focus and shutter push buttons.

THE CONNECTIONS TO THE MICROBIT

THIS IS THE MICROBIT BLOCK CODE FOR THIS PROJECT

THE COMPILED MICROBIT CODE - DOWNLOAD AND SEND TO MICRO BIT - OR OPEN UP IN THE EDITOR.
microbit-Camera-shutter-release-with-BT2
Text Document 1.5 MB
Download

This was my idea to mount a microphone electret condensor capsule adjacent to the hing on the leg of a pair of spectacles.

These condensor mikes are omni-directional and being so close to the sound source would provide sufficient volume for decent audio recordings.

As they move with your head the audio levels remain unchanged as you head moves.

My first proof of concept used electret mics that were originally used in portable cell phones. later versions switched to the in-line mics found on IOS or Android earphone headsets.

The finished project showing the way that the microphone cable is routed from the rear of the earloop.

the mic element from the in-line microphone is attached to the leg of the spectacles using double sided tape and then a section of clear heat sink tubing was then slid over it to provide both mechanical stability and extra protection.

The cable from the mic being routed down the frame and held in place using more clear heat shrink tubing.

The mic element pcb could be removed from the in-line cable and a new lead soldered to the pcb withe the TRRS or TRS plug depending upon whether the mic was going to be used as a camera input or as a smart-phone accessory.

When used with the original mains power supply then the battery status is largely irrelevant. However, if you have used an external 8.4v Lithium-ion battery pack then it is important to know what cahrge is remaining in the battery.

The modification here performs that purpose.

The first stage is to open the battery box.

Do this by inserting a sharp blade in-between the hard plastic base plate and the softer plastic cover.

Work the blade down into the opposite corner to split the ultrasonically welded seam.

Cut down to the bottom corner on both sides of the battery box.

Remove any "hot-melt" glue from around the PCB

To complete the modification a 1/8w 10K resistor is soldered from the "T" pad to the negative lead connection pad (black wire).

Once that is done re-assemble the box and apply a little drop of "super-glue along the 3 edges. Capillary action will spread the glue along the seams. Wipe off any excess before it dries.

Using a ZY12PDN PCB available on Ebay UK or Amazon.com  ( https://amzn.to/37GCuPK ) It is possible to build a USB PD unit to externally power your 8.4v digital camera.

This tiny module provides a means of programming the Power Delivery voltage from the USB-C host device.

The push button is used to set the output voltage. Each depress of the button cycles through the voltages.

It can also be programmed to negotiate a fixed voltage output.

As this unit will deliver 9V at up to 5A (with a suitable host) it can be used to provide the basis of an 8.4volt external power supply if a silicon diode is inserted in the positive output terminal of the device.

This diode will nominally drop 0.6v at typical currents up to 3A.

I chose the 1N5400 as it is capable of 3A continuous current. It would be possible to use a 1N4000 series as in most cases the peak current does not exceed 1.5A with many digital cameras.

This is the completed unit with details of how the 1N5400 diode is connected in the positive output lead of the unit.

The box that I used is from Amazon. https://amzn.to/37DMlpy

The box needs to be filed on the input side to accommodate the USB-C plug.

The PCB is held in place using double side adhesive pad. The output lead is wired to either a 5.5mm x 2.1mm or 4.8mm x 1.7mm plug depending upon the type of socket on the dummy battery box.

With the suggested plastic case file out one side so that a USB-C plug fits through the aperture. 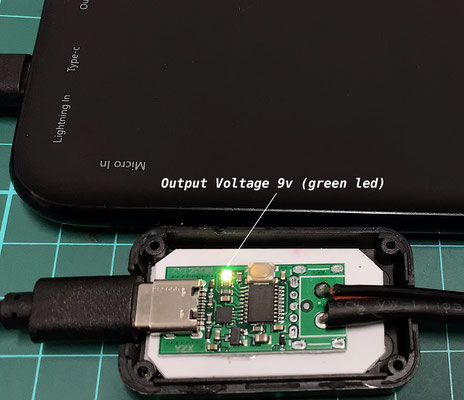 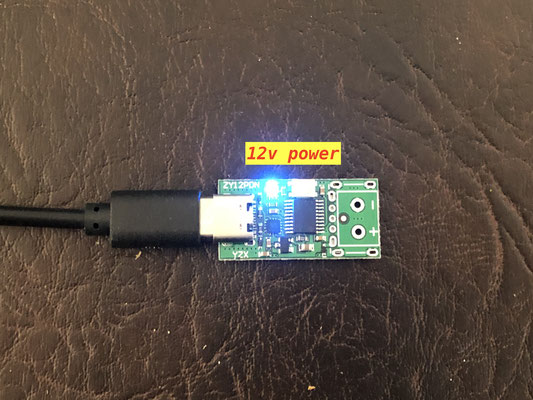 To program this unit to a set output voltage of 9v first disconnect the unit from any power source.

Press and hold the push button down and connect the PD Host.

The LED will flash all colours, release the button and then cycle through the voltages until you reach the one that you require.

You can check the output with a voltmeter or observe the colour of the LED.

for 9V it is GREEN

By adding a 8.4v lithium ion battery in parallel with the output from the unit (after the series diode) it provides addition current support if needed and also a backup power source if the Host power-bank becomes depleted. At this point this lithium ion battery continues to provide power to the camera. The power-bank can be then exchanged.

An illustration of the ZY12PD board with the series silicon diode and the lithium ion backup battery installed in a small plastic case.

In the latest upgrade of this idea I have included a LED Voltmeter module to draw a slight amount of current from the Host Power Bank.

This 30mA of current is enough to prevent the power bank from going into the sleep mode if there is no load detected.

This is a useful feature as with many cameras going into standby mode this in turn would cause the power bank to go into sleep mode.

It would then be necessary to unplug the ZY12 unit in to wake up the power bank and begin the voltage negotiation sequence again.

To prevent the onboard lithium-ion battery powering the LED voltmeter when the Host power bank is disconnected it is necessary to wire to voltmeter to the +/- outputs of the ZY12 board.

The in series diode prevents the voltage from going to the LED voltmeter module.

I chose a module which drew sufficient current to keep the host power bank, that I normally use, alive but would have minimal effect on the total output capacity from the unit. Some power banks may require a higher standing current to keep them alive. I suggest increasing the current in steps of about 30mA by adding a parallel resistance of 330 ohm if your power bank still shuts down with this module alone.

If the addition 330 ohm doesn't work try a 150 ohm which would add 60mA to the standby current.

the unit that I used https://amzn.to/2sXLm4X

Adding a 390 ohm resistor in parallel with the LED voltmeter increased the standby current to 44mA which was enough to prevent all of power banks that I currently use.

The sequence of connection of the unit is important as the serial data communication has to take place to set the negotiated voltage from the host PD device.

When the unit is plugged into the Host PD device the green led light will illuminate denoting successful connection.

If you press the power on button to "wake up" the unit it may not correctly communicate with the ZY12PD board and the LED will flash a white/cyan colour.

Unplug the device and reconnect it to correctly restore communication.